O Come, Let us Adore Him

In celebration of Christmas, another obvious theme in art history presents itself. The birth of Jesus was conveyed in a million different ways and is possibly one of the most prevalent subjects in the history of art. Usually depicted as The Nativity, Adoration of the Shepherds, or Adoration of the Magi, the subject is so familiar we can all describe it easily without needing to look. Most of the works contain the common elements of the Holy Family, adorers, angels, and the token farm animal. It was up to painter after painter to each find a way to recreate the subject in a composition that was more interesting than anyone else’s. After a while, there’s almost an attitude (to the non-art lover this is definitely the case) of “if you’ve seen one, you’ve seen them all.” Yet there are many treatments of this subject that still stand out for their unique presentation, and El Greco’s is one of my favorites.

First, let me tell you why El Greco is a badass. I am definitely biased toward Spanish art – the bulk of my study of art and culture revolves around that country. So I’ll be the first to tell you that El Greco (1541-1614) is the best Mannerist. Mannerism, is a strange movement. It often gets nestled in with High or Late Renaissance, but can be recognized as a stylistic reaction against the natural and harmonious ideals of the Renaissance. When I learned about Mannerism, my professor gave an unforgettable analogy of Mannerism to Snooki from Jersey Shore: the key words being “highly artificial.” This is what makes El Greco’s  style the ultimate in Mannerism. Everything about it is highly artificial. And here’s some trivia for you, El Greco means “the Greek,” because he is actually Greek. His real name is Doménikos Theotokópoulos, but the Spaniards couldn’t pronounce that (nor can I, too many effing syllables), so they just referred to him as “that Greek dude.” He is always considered a Spanish painter, despite being from Greece, because the bulk of his life and career was spent in Spain. He lived in Toledo, and died there at the age of about 72 or 73. 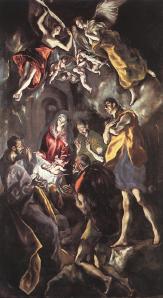 El Greco made a few versions of the Adoration of the Shepherds, but this is considered the best. Having been fortunate enough to see it in person, I can attest that this work is spectacular. Indeed, his whole series of paintings of the life of Jesus is spectacular, and to stand in the gallery of the Prado in which they hang together, one feels quite the sense of awe. In this very vertical composition, the newborn Jesus is surrounded by adoring shepherds. Mary is in her usual red and blue garb, with her usual docile expression, standing over the child and delicately holding up his swaddling cloth to reveal him to the adorers. Joseph, who never gets the attention he deserves, kneels next to the baby, his hands held up in devotion and awe, as if to say, “Boom! My wife made a baby with God!” The visiting shepherds, one kneeling and two standing, also make various gestures of prayer and devotion upon seeing the child. A group of angels (I just love El Greco’s angels) hover above, their figures making a pyramid formation to frame the group below.  The background is dark, and the only source of light seems to be Jesus himself. To emphasize his divinity, El Greco paints him illuminated like a living light bulb with his light touching each figure and casting shadows behind them. He is also incredibly tiny, no bigger than a wee little Yorkshire Terrier. This contrasts highly with the long and gangling figures around him, which is El Greco’s trademark style. So artificial are his figures that they seem to stretch or be on stilts. Their limbs are out of proportion and heads are probably too small. But El Greco does amazing things with garments, their folds drape the figures in beautiful ways as if they practically float. He is also an amazing colorist, giving each garment vibrant, saturated color. He often paints unknown surroundings as well; here the background is shadowy and unrecognizable. The mysterious atmosphere paired with the aura of clouds, vibrant colors, and high contrast of light give this work a sense of drama and energy foretelling of the Baroque.

Wishing a very Merry Christmas to you all, and joyous New Year!

2 comments on “O Come, Let us Adore Him”