Double, double toil and trouble;
Fire burn and cauldron bubble…
The famous witches mantra in Shakespeare’s Macbeth still comes to mind when bringing up that quintessential antagonist of All Hallow’s Eve – the witch.  Happy Halloween everyone! I know I just posted two days ago, but I was a little late on that one, and this article was always going to be saved for Halloween. The character of the witch has been evolving since ancient times. The witch comes in many types – old crone, sexy diva, cunning seductress, treacherous cannibal, conniving sorceress. The history of art is abundant in witch imagery because artists were fond of the topic for its creative possibilities and potential for invention and visual intrigue. It was also an opportunity to experiment with the female form. You’ll find that images of witches in art of centuries past do not match the Wicked Witch of the West archetype with green skin and pointy black hat, but usually the beautiful seductress or wrinkled old hag. Superstitions involving witchcraft were extensive, and we all know what they lead to over the years: large scale witch-hunts leading to the deaths of thousands, perhaps even millions of women.

The Malleus maleficarum, 1487, a sort of clerical handbook on recognition and prevention of witchcraft, promoted stereotypes of witchcraft in order to eradicate witches. These stereotypes motivated the large scale witch-hunts of accused women. Women became scapegoats and were often accused of witchcraft when they displayed socially unacceptable behavior, when bad weather destroyed crops, when livestock fell ill, when children did not survive birth or died shortly after, or when men could not perform sexually. Rooted in misogynistic Western ideas, the stereotypes of witchcraft included the practice of vampirism and cannibalism of children, carnal abominations with demons and the Devil, ritual Satanism and sorcery, sacrifice of children to the Devil, sexual deviance or promiscuity, and rendering men impotent by robbing them of their penises or by other magical means. These stereotypes influenced the artistic iconography of witchcraft established in the Renaissance and further developed in the Baroque period. Spanish painter Francisco de Goya revived the subject in the 1790s and incorporated a burlesque tone to expose and satirize the superstitions behind it. 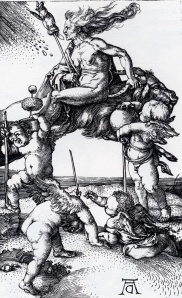 Dürer’s Witch Riding Backwards on a Goat, was instrumental in the construction of the physical stereotype of the ugly hag witch, with wrinkled face, large hooked nose, long gangling limbs and shriveled breasts. In Dürer’s time, it was believed that postmenopausal women had higher sex drives which was considered revolting not only because of the non-ideal bodies but also because they could no longer procreate. Here, Dürer’s witch is mounted on a goat but faces backward, with her hair flowing in the opposite direction of the goat’s flight. Putti attempt to tie her and the goat down to prevent her escape. The witch’s deviant sexuality is implicated in the goat, a traditional symbol of lust, her firm and ready grasp of the goat’s horn, her suggestively open mouth, and the phallic distaff and spindle propped between her legs.

Salvator Rosa, a Florentine painter of the theatrical Baroque, retained much of the established iconography of witchcraft when he developed the subject in his art. His sprawling canvas, Witches at their Incantations, is almost an allegory of witchcraft. This work shows a number of figure groups each engaging in a different aspect of witchcraft. The far left group consists of two figures who point at the central tree, a veiled figure adorned with wreaths holding a ring of candles, and two crones beneath them hovering over an open casket and propping up the corpse to force it to write something on paper. To the right of this group, two naked witches lean over a miniature wax mannequin held up to a mirror, a common representation of love spells. Above this pair a dead man hangs from the central tree, his corpse being fumigated by a plump, naked witch while another clips off his toenails, presumably to use as some sort of magical ingredient. Another plump, naked witch seated in the center of the foreground, with bright white hair, is surrounded by magical aids for spell making and rests a pestle for grinding human bones between her knees. To the right of the seated witch, a soldier, perhaps a captive being forced by the broom-wielding crone behind him, leans over a circle of candles set up for another ritual. The diabolic procession at the far right is another innovative aspect, showing Rosa’s inventions of infernal creatures upon which some hags are mounted. Included among this group of mounted figures, a hag holds up a swaddled baby for sacrifice into a mysterious pit. The background of the composition is a bleak and foreboding horizon with thin streaks of blue and pink, and the eeriness of the scene is enhanced by tenebroso light.

Francisco de Goya, the world’s first Modern painter (in my opinion), developed witchcraft in his art as a vehicle for satire of superstition and ignorance. His many elaborate witch images are meant to be seen as devises of dark humor. Aquelarre or Witches’ Sabbath, depicts the often seen iconography of the Sabbath, a gathering of witches with the Devil for worship. The composition consists of a group of witches sitting in circle around Satan, who takes the form of a huge billy goat. They have adorned his horns in a garland wreath, and he is visibly pleased because of all the children and infants the witches brought to sacrifice to him. Looking from left to right, the viewer of this work begins to pick out the tiny figures of children, from a partially decayed corpse sprawled on the ground to an alive child’s legs poking out from under a witch’s shawl, an emaciated child being held up by an old hag, and a plump baby cradled by a young, pretty witch. The Devil points to her with his left hoof, evidently in favor of her offering. In a gruesome twist on common rabbit hunting practices, the half-naked witch on the far left props up a stick from which the grey bodies of dead babies hang to add to the sacrifice. The gathering takes place in a bleak brown landscape with a half-moon in the sky that reflects Satan’s sharply curved horns and owls and bats (considered infernal creatures of the night) flying through the dark foreboding sky.
If you are freaked out by all this, take comfort in today’s more lighthearted archetypes. Goya’s attitude toward superstition foreshadowed our current views, and the ideas behind the stereotypes of the likes of the Malleus maleficarum are now, obviously, quite ridiculous.
Prepare thyselves, ’tis a life force! The potion works!
Greco’s Ghosts offers a drink pairing with this article. There are many different methods to this mix. I picked the Betty Crocker version because it’s green and I just feel that green is the appropriate shade of this brew – think of the Wicked Witch of the West and the potion of the Sanderson Sisters… Also, this doesn’t call for the elaborate dry ice presentation, because I’m all about convenience.
Witches Brew
1 quart Lime sherbet, slightly softened
1 container (12 oz) frozen limeade, thawed
1 bottle ginger ale
Vodka
Add sherbet, limeade, and ginger ale to a punch bowl. Add as much vodka as thy life force permits. Mix and pour into witchy-looking glasses. Garnish with a lime wedge and/or gummy worms.
Come little children, I’ll take thee away…