A new feature on Greco’s Ghosts! “You Oughta Know” will introduce you to artists or works of lesser fame than the much studied grand masters. These artists or works in the realm of art history are likely not familiar to the average person, but undeservedly so. Greco’s Ghosts will attempt to shed light on these lesser known elements of art history, and explain why they matter. 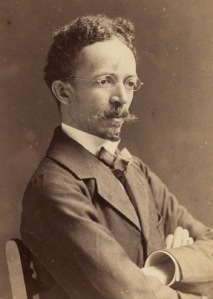 Born in Pittsburgh in 1859, Henry O. Tanner’s mother was a former slave who escaped north through the Underground Railroad. His father was a minster who encouraged his interests in painting, believing black people could succeed at anything. Tanner was accepted into the prestigious Pennsylvania Academy of Fine Arts in 1880, where he studied under and became a favorite student of the great Thomas Eakins. In 1891, Tanner left for Paris to continue his artistic studies, where he remained for the majority of the rest of his life. There, Tanner enjoyed the opportunity to study art as an equal; issues of race were not as present. He died in Paris in 1937.

Henry O. Tanner is often called a realist painter, but his style became more painterly in later years with more experimentation in color and the effects of light in his compositions. Overall, I would argue that Henry O. Tanner’s works often embrace genre painting and realism but contain an additional vibrancy and expressiveness that make them more interesting. This often comes from his use of light, as seen in his most famous work, The Banjo Lesson. 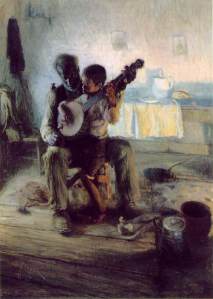 In The Banjo Lesson, Tanner paints an intimate scene of a young black boy on the lap of an older man, possibly his grandfather, receiving a hands-on banjo lesson. The setting is private and modest; the two figures absorbed in the lesson. The young boy peers over the large instrument intent on plucking the correct strings while his grandfather focuses on his progress, his right hand rested on his knee ready to reach up and assist if needed but determined to let the boy play. Tanner’s purpose is to convey these black figures as individuals in an exchange of knowledge between the generations, contrary to popular illustrations of the time that would depict such figures as buffoonish stereotypes. The other fascinating element of this scene is the atmosphere that Tanner’s light creates. He paints intense contrasting shadows, with the pair of figures in a dim area and an unknown, bright source shining toward the wall behind them. This effect is certainly not easy to create and Tanner definitely went the difficult route with this composition, yet he renders it masterfully.

A genre image, The Young Sabot Maker, of a young apprentice making a pair of sabot, or traditional wooden shoes of Brittany, Tanner again features the themes of old teaching young, the transmission of knowledge, and good work ethic. The comfort and ease of the older craftsman at his chore is contrasted by the physical effort of the boy. His stance is wide and his cheeks flushed as he fiercely grips his tool, moving vigorously and with determination. The older craftsman pauses from his work, smiling proudly as he checks the young boy’s progress.

Henry O. Tanner painted some profound religious works during his tenure in Paris, one of which was given the high honor of being shown in the 1896 salon. Daniel in the Lion’s Den was recognized by critics because of Tanner’s use of light and emotion in a biblical scene. He paints the image of Daniel’s wrongful imprisonment in a somber atmosphere (Daniel 6: 16-24). The solemn figure of Daniel rests peacefully against the wall, undisturbed by the beasts around him. An unseen window lets in a ray of light, illuminating Daniel from below the shoulders, his prayerful face remaining in the shadows. Tanner conveys a profound religious moment, once again with the masterful use of light and shadow.

Saving the best for last, this final example, and my absolute favorite, could even stand as the single reason why “You Oughta Know” Henry O. Tanner. His best religious work, The Annunciation, treats an omnipresent subject in art history in an innovative way. Tanner paints the Virgin Mary as she might have really looked, in a room which might have really existed. She is depicted as a timid teenage girl dressed in Middle Eastern peasant’s rags, under which we can see her bare foot exposed. She is not shown with a halo, a lily branch, or any other of the usual holy attributes. She is simply a scared young girl bracing herself against the bombshell of news that she is hearing. The angel Gabriel, appearing before her to announce that she will bear the Son of God, seems to be nothing more than a flaming bright light which casts shadows across the room. Framing Mary’s huddled up figure are vibrantly painted draperies in red and blue. Tanner’s colors are bright and saturated, adding to the intensity of the moment which is further conveyed in Mary’s clenched hands and humble yet curious expression.