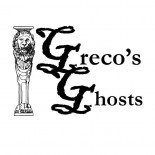 It seems a bit cliché to have one of the earliest posts on Greco’s Ghosts written about Michelangelo’s David, but I could not resist. I’d like to think that I have somewhat legitimate experience with this work of art, as I have been one of those fortunate enough to have seen the real thing in person. There is nothing like the impression a work of art can make when you’re actually standing in front of it, especially an iconic work such as David. This is a story that I am fond of sharing with those interested to hear it: David was one of the top priorities for me on the list of things to see during my short 4 day stay in Florence, along with the Uffizi and the Duomo, of course. We took off early in the morning thinking we could avoid the crowds if we got there before the Accademia opened its doors. Ha! Stupid tourists. Turning the corner we saw that we weren’t the only stupid tourists with that bright idea. There was a line out the door and stretching 2 whole blocks down from the Accademia. But it was certainly worth the 2 hour wait. After finally purchasing our admission and walking into the grand Galleria, turning the corner and seeing the colossal David at the end of the hall was a moment I’ll never forget. 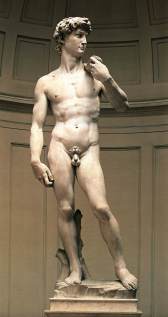 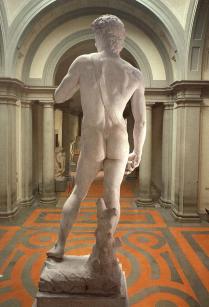 Before going any further, allow me to summarize David’s heroic tale for those less familiar with it. From the Old Testament’s first book of Samuel, David was an Israelite whose people were invaded upon by the Philistine army near the Valley of Elah. Ancient battles were often settled in the manor of having the champion warrior of one side face the champion warrior of the other in one-on-one combat. The Philistine champion was a giant brute named Goliath. No Israelite champion, nor King Saul himself, volunteered to face Goliath in combat, until David, a young insignificant shepherd, came forward. He told the king he would defend his people the same way he protected his flock against predators. David would enter the fight with nothing but a stone and a sling as his weapon, and no armor because he could not bear to walk in the heavy suit of metal that King Saul had offered him. He faced Goliath, declaring, “You come to me with sword and spear and javelin; but I come to you in the name of the Lord of hosts, the God of the armies of Israel, whom you have defied… I will give the dead bodies of the Philistine army this very day to the birds of the air and to the wild animals of the earth, so that all the earth may know that there is a God in Israel” (1 Samuel 17: 45-46). He then placed a stone in his sling, swung it and unleashed, hitting the giant square in the forehead and killing him with a single blow. Standing over his foe, David then took Goliath’s own sword and cut his head off with it. The Philistine army fled, and David became a hero and would later become king.

Traditional artistic treatments of this subject have often shown David in the act of beheading Goliath or after the fact, standing over or holding the giant’s head. Michelangelo has taken an innovative approach to the story, depicting the hero, I argue, in contemplation before the battle. In the classic contrapposto (relaxed stance with one leg bearing the weight and the hip dropped above the other), one hand holds the sling draped over his shoulder while the other clenches it at his side. He gazes to the left with a furrowed brow, the veins in his neck strained. In the heroic nudity exemplified by the Greeks, David’s every muscle is sculpted in intricate detail. Despite the disproportionately large hands, David stands as a specimen of utmost physical beauty. 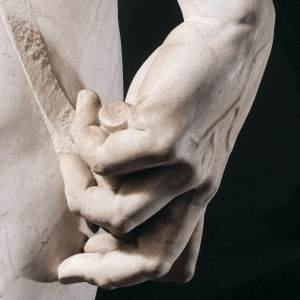 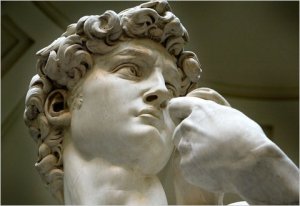 There I stood, my own neck becoming quite strained as I looked up at this colossal beauty for damn near 45 minutes. Of course we have all seen pictures of Michelangelo’s David a hundred times before, but the thing that first stuck me after seeing it in person was the sheer height of the statue. David is huge. In all the pictures I’ve seen, I never really paid attention to or appreciated this statue’s dimensions. I don’t know the height of the pedestal it stands on, but that by itself is as tall as a human. The picture below gives a good idea of the statue’s scale. 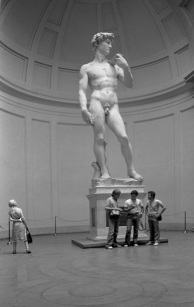 The other thing that struck me was David’s expression. Despite the statue’s height you can still get an excellent view of the face. I must have done at least 15 laps around the perimeter of David, yet I kept coming back to the side to gaze at his face. The very static figure of David becomes incredibly dynamic upon studying his expression. People interpret it in different ways, but his face is so intense that for me he can be doing nothing here but anticipating his upcoming battle. His eyes are focused and intent. He seems zealous and determined. One imagines that he has just picked up his weapon and is preparing to march toward Goliath and confront him, his gaze focused on the giant waiting atop a nearby hill. This is truly the beautiful thing about David’s story and about Michelangelo’s depiction of it: he faces almost certain death with a fortitude not imagined possible for a young man of his position and experience. I stood contemplating this profound notion while trying to tune out the other tourists bustling around me snapping pictures, giggling about David’s penis, the substantial bush protruding above it, and the fact that he isn’t circumcised. 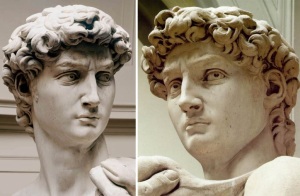 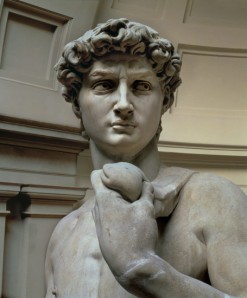 My friends had moved on after about 5 minutes in front of David and wandered through the rest of the gallery. About half an hour later they came back and found me still standing there. “Hey, we’re done so we’re going to go check out the gift shop.” I said I’d meet them there in a few. Turns out I had a hard time tearing myself away from David, so I spent the next 10-15 minutes trying to say goodbye. I thought to myself that I hoped it wasn’t really goodbye, that someday I’ll return to Florence, and that we’d meet again. When I finally turned and headed down the corridor and found my friends (with many forlorn looks back at David over my shoulder), they seemed quite irritated at that point.

“Geez, how long did you really have to stand there and stare at his perfect ass anyway?”

“Sorry, but I need to buy some sort of souvenir so that I never forget this.”

I left the Galleria dell’Accademia with a poster of David and a book containing pictures of every angle and detail of Michelangelo’s masterpiece. 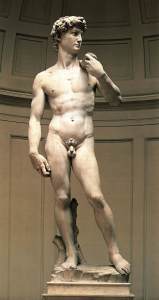 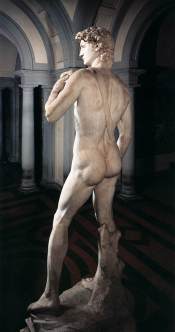